With great honor, I share this interview with you. I met author Carlos J. Cortes online about a year ago when I found the group On Fiction Writing on Goodreads. His personality, charm, and wit dripped from every word, and I thought that if this carried over to his novels, I wanted to read everything he wrote.

I eagerly picked up his book Perfect Circle and fell in love with his writing. When The Prisoner came out, I fought with my husband over who got to read it first. Both books were fresh, intense, breath-taking. The characters were deep, multi-dimensional; the plots thick. I intend to be the first in line to buy his next book.

Carlos has been compared to Tom Clancy. And the complexity and depth is certainly on par, but Carlos has out-mastered Clancy with his story telling ability, keeping the pace moving at breakneck speed, avoiding the lengthy, monotonous details, and bringing his characters to life in a way that Clancy couldn't do. I am hoping to see The Prisoner in the movie theaters, but not sure how Hollywood will handle "shitcicles" on the big screen. 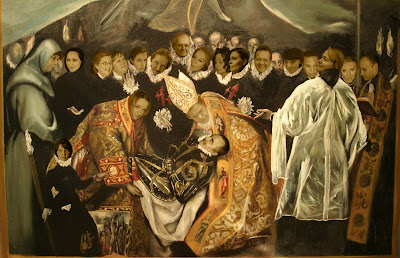 [The 20 authors contributing to the Ménage à 20. Carlos is the one front and center.]

September 2009, Carlos and Their Eminences (the other moderators of On Fiction Writing) announced a group project. 20 stories, 20 authors, one Ménage à 20. This anthology was one hell of a ride for the authors who participated, but for Carlos, it was hours upon hours of work. Without him, the anthology never would have come together. I am thankful and honored to have been a part of this project. 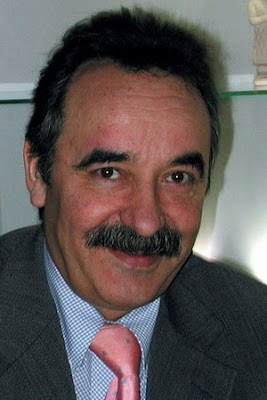 Rita: Why did you become a writer?
Carlos: I don’t think we plan to be writers, at least I didn’t. I’ve written hundreds of scientific and technical papers and ten non-fiction titles in a variety of subjects from Bridge to fiber optics physics and lighting science. In my spare time I wrote snippets of my experiences and tried my hand at several novels in Spanish. One day, my non-fiction editor suggested I wrote in English. I translated a manuscript and submitted it to discover I didn’t have the foggiest idea of what ‘real’ writing meant.

I enlisted in several writing workshops to learn technique. Ten years and twenty novel-length manuscripts later, when I considered my work was barely readable, I rewrote Perfect Circle, the original manuscript, and submitted it again. Then I carried on learning and writing, in that order.


Rita: What inspired your two stories My Valentine and Spring Sprung?
Carlos: Short stories are excellent exercises for any writer; miniature novels with plot, opening, middle and end. Over the years, I’ve written literally hundreds. One day, I set to organize my files and compiled three collections; The Folks Next Door, volumes one and two with fifty shorts each; The Christmas Tree, with sixty pieces and Bar Tales, with scores of preposterous pieces that didn’t fit in the other two.

All my shorts spring from an observation, a piece of news or an overheard conversation at home of during one of my frequent travels and involve ordinary people. Naturally, every feat of courage, debauchery or despicable deed has been perpetrated by an ordinary person because, as far as I know, there’s never been anything else in this planet. Like Tehilard de Chardin, I don’t believe in good or bad people, only on people whose thought process is similar or different to mine.

My Valentine and Spring Sprung are from The Folks Next Door volume one, written in the early 90’s and prefaced with:

‘Whenever the news unveil a new horror to afford us a glimpse into the darker aspects of the human soul, we often forget the actors in these tragedies are people like you or me; the taciturn bus driver, the affable hotel porter or the prim lady walking her poodle. People who awake under the same sun, dream under the same moon and harbor the wickedest thoughts. The folks next door is a collection of short stories about ordinary people; someone’s neighbors, mine or, perhaps, yours.’

Rita: How did you come up with this idea to put together an anthology?
Carlos: Writers need to write and accumulate experience. With so many talented writers at OFW, I thought it would be a good exercise for them to experience the pressure and difficulty of the publishing process. In addition, to have a sample of their work disseminated far and wide could afford new writers a level of exposure. I believe one or two writers from Ménage have already been spotted by agents who have requested manuscripts.

Rita: What was the experience like? Would you do it again? How do you feel about the result? (I can imagine it was hell...)
Carlos: Ménage was an eye opener. I experienced first hand the ghastly product agents, editors and publishers have to wade through every day of their working lives and explained why an average agent signs five or six new writers each year from as many thousands of queries.

Any piece of writing can be made fit to publish, but the amount of editing time needed to straighten shoddy work is far beyond the industry capacity.

My average for rewriting is four pages, or one-thousand words, in an eight-hour working session. I checked with Preston, King, Harris and other bestselling authors at the Science Fiction and Fantasy Writers of America and International Thriller Writers, two of the professional organizations I belong to, and they thought I was remarkably proficient. (Thomas Harris can seldom rewrite more than a single page on a good day).

Will I do it again? I don’t see why not, but I would insist writers did their homework before submitting and would refuse to edit anything beyond catching a typo.


Rita: What books can we expect from you in the future?
Carlos: I have finished ‘Mahdi’, a thriller set in England, Israel, Tibet and Egypt, about the fabled Mahdi, the Muslim long awaited scatological redeemer. When I get the manuscript back from my beta readers, I will address their comments and send it over to my agent. Meantime I’m plodding along with ‘Light Bondage’, a vast undertaking for Random House that will need another year, ‘Cordova’ a thriller series, ‘The Damn Book’ a weird project on Alchemy, and ‘The Spaniard’s Woman’ a historical saga on the age of sail, Georgian England and South Africa.

The novel Mahdi is on my radar, but this time, TJ will read it first without a fight. Having already read it, I've been wanting to talk to my husband about the characters, my favorite lines, and the plot. I'm used to exchanging quotes and comments about books with him, and the forced silence is driving me crazy.
Posted by Rita Webb