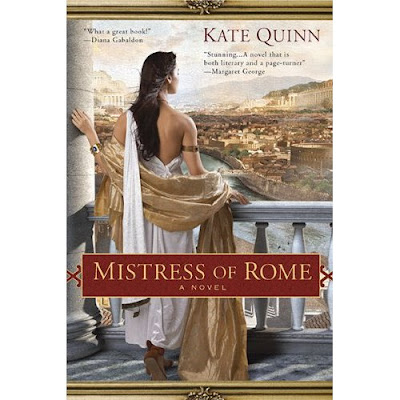 My daughter sat in the grocery cart, and I was supposed to be picking out a book for her. But instead, I steered us down the adult books aisle--it wouldn't hurt to check if my local Target carried a book I already owned, right?

And then my eyes lit on it. The Mistress of Rome. Only two copies left.

I wanted to jump up and down, and I had this overwhelming urge to tell the salesclerk, "I know the author! I even have a short story in the same anthology as one of hers. No, I've never seen her face to face. No, I've never heard her voice. But really, I do know her!"

Well, I've read all the reviews, wanted to argue with anyone who said anything bad about it, and nearly jumped down someone's throat for ripping on my favorite characters. Even after finishing the book several months ago, I still feel like Thea and Arius are friends that I will defend to my dying breath.

The Story
Mistress of Rome follows the lives of two girls of fourteen, Thea the slave and Lepida the slave's master. Lepida is ambitious. She wants power and jewels and men. First on her list is the gladiator Arius the Barbarian. When Thea and Arius fall in love, Lepida sells Thea to a whore house.

Pregnant, Thea is then sold to a musician who trains her to sing and play the lyre. Her fame grows until she catches the eye of the emperor and is taken as his mistress.


The Characters
For me, Thea made the story. I really identified with her. She's human--failings and all. A loving mother who must leave her child in the hands of another in order to keep him alive. A woman made of steel who would do anything to survive. A survivor who feels guilty for surviving. A dreamer who wants freedom. A lover. A fighter. A believer. I felt like she is me.

The World
Kate's portrayal of Ancient Rome didn't feel like a dry history book. She painted the world with vibrant colors. The gladiator games. The fights. The parties. The politics. It felt more like I was stepping into one of the best fantasy books I had ever read.

The Writing
I started thinking about what I would rate this when I was halway through. I figured I would give it 4 stars, leaving me room to give her next book 5 stars, for I expect Kate Quinn's next book will be even better. But by the end, I knew rating her 4 stars would by lying.


The Author
Stalker that I am, I requested an interview from Kate Quinn, and she graciously agreed. So please return tomorrow for the conclusion of my review.