Song of the Nile by Stephanie Dray 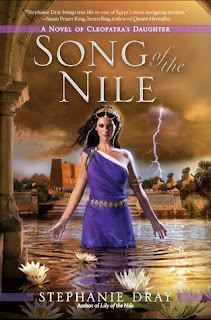 Song of the Nile by Stephanie Dray
My rating: 5 of 5 stars

Dark and beautiful. From the moment this story began, I was gripped by Selene's pain and ambition, terrified the cost of earning the title of Queen of Egypt would be her soul.

Cleopatra has grown up at the age of 15. Married to Juba, an African king, she must prove her worth to the emperor--securing grain, building a new port and city, civilizing a "barbarous" people, promoting the emperor's agendas... But what the emperor wants most is a Cleopatra like Julius Caesar and Mark Anthony had before him.

The stakes are higher as she vies to win the emperor's approval in order to earn the title of Queen of Egypt. Nothing will stand in her way.

What I loved most...
I loved Selene. She's flawed in her obsession with her ambition to fulfill her roll as queen to her people, and yet she's passionate and caring and daring and lovable. I rooted for her and was scared for her and silently begged her not to follow her foolish plans to sell her body to the devil--er, I mean, emperor.

What I admired in Stephanie Dray's writing...
The disaster of a marriage between Juba and Selene was powerfully written. His pain as he watched his bride run away from him and into impending disaster was the thing that gripped me the most. On their wedding night, he asks if they could be friends. She says yes, she could forgive him his role in the demise of her parents and of Egypt. He says can we be more than friends. And when she rejects him, his pain drips from every word, and my heart bled for him.

My recommendation...
Read this powerful book. Personally, I can't wait to read more by Stephanie Dray.

Come back Friday for an interview and giveaway!
Posted by Rita Webb