Joseph Gergis and the Passage to Eternity 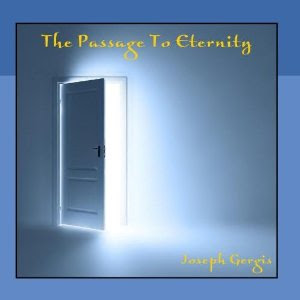 Joseph Gergis is not one to let his dreams slip away from him.

In February, I had the honor of watching him produce his second album Passage to Eternity. Even with lack of sleep, stumbling to work each day, and living on caffeine, he poured his soul out each evening as he composed, crafted, and recorded an album in 28 days.

Listening to the final piece, my jaw hit the floor--Watch out for flying hyperboles!--he has far outpassed many of the musicians in the Electronica genre of music I have heard and enjoy. The closest group I could compare him to is Bond, a string quartet that leaves me breathless whenever I hear their music.

The music in this album is constantly changing, moving, growing, and building, each song more intense than the last. There is a story in this music, the story of a man who went out to find freedom and in that pursuit, he found eternity instead. Isn't that not what all creators find?

I interviewed Joe last February, and here, I follow up with another interview as his new album is now available on Amazon and iTunes.

Rita: Tell me about your album.

Joe: I've already put out quite a bit of information about the circumstances and development of 'The Passage to Eternity', between my blog and the album jacket released for iTunes. Instead of rehashing that, let me take a different perception and share with you my impressions of listening to it as an informed listener, a couple of months later.

I have to admit that when I listen to an album, I get hung up on it. I believe I listened to 'Fallen' by Evanescence constantly for nearly six months. That's not to say I listen exclusively, but I do listen quite frequently. That's precisely what's happened with this album, and not for any self-congratulatory reason. I'm listening with different ears this time; the ears of someone who knows how something was created, but wants to experience the whole work as a finished piece.

What I keep finding out is that I'm in awe of the work. Maybe THAT sounds self-congratulatory, but remember this: all through the development I listened to individual sounds. Snippets. Threads of melody. I had not had an opportunity to listen to this work and analyze it critically as a whole. Now that I have my composer's hat off, I can appreciate this in a different light. My most common question is, 'how in the world did I pull THAT off?'

It's also true that I am finding my 'errors' (I'll NEVER tell) and evaluating how to do better. What to learn, what to improve upon, these are the points I need for my next album.

But enough of that, what of the album? In short, what started out as a hastily thrown together effort became a journey. I did not intend for that to happen and to be so blatant in the music, but with each song, with each title, the idea of this being a musical journey, reflected and mirrored by the fictional story that wrote itself as a result of the music kept being reinforced. When I listen without judgement, without reflection, and become lost in the music, all I see is the journey.

You should see my mind's eye when it creates the video for the music.

In the beginning I had no idea where this would lead. As the elements came together, it very clearly became the expression of a trip, a long trip, taken as an exploration of very deep philosophical concepts. What is eternity? What does it sound like? What happens if you step through its door? What stops lay along the way as you get to the door to eternity? Maybe this sounds like overly pedantic philosophy, and maybe I have no idea what or where this came from, but there is an intent in this album that wasn't there in my prior work.

Rita: What advice do you have for anyone wishing to create music?

Joe: Advice is something that is so freely given, and so very often wrong. I should not choose to burden others with my modes of thinking. Let everyone come to their own conclusions on how to create. But in the interest of answering the question, let me say a few things.

First, I realize I could talk endlessly about programs, about hardware synths, about VCOs and arpeggiators, about modes and scales and when to break the musical rules, and the reason I won't is that this is all knowledge anyone can gain. If anyone's interested in specifics I am always happy to answer emails.

What I really want to talk about is the why of it. As I said, I'm not about to dole out advice on why one should, or should not create, or how they should, or should not do so. That is the absolute joy of the creative process, in my opinion. Finding out HOW to create something is at least as enjoyable as actually creating it.

Music is a joy of expression. It is a mode of communication, to me, where I can speak without words to everyone. The language is universal. It may not appeal to everyone, and nor should it. But for those of us called to speak in that language, it is a torrential river that cannot be stopped. We speak in music because we must. If you ever recognize this in yourself, do not deny the call. To do otherwise is to deny who you are. Speak. Sing. Create.

Others will say that your created work is 'not very good', 'not appealing to the mainstream', and other great nay-sayings of our time. To that, I say, GOOD. I do not write music for others. I write because I must. I hope that the joy I feel in creating it is shared by whomever chooses to listen. I hope my music will be widespread, but I am a realist and don't foresee this happening for a long time to come. And that's fine with me. Being a rockstar was never my intent. I am not saying I wouldn't enjoy it, but composing to be in the limelight was never, ever, my intent. Find out why you want to do it, and if you judge to be a good reason, then go forth and do it.

And don't quit. I have wanted to quit so many times it's not funny. When I tell this to my friends who know me well, they are astounded. But the truth is that I am just as human and my ego is just as frail as everyone else. I get beat up and beat myself up pretty hard during the process. How else will I improve? I am quite sure I have a long way to go, as well. If I quit though, I will not improve, and the river that runs so violently, as I mentioned, cannot be stopped.

So what this amounts to in words is this: dream. Love. Create. Do not look back, except to learn and improve. Drive forward with a strength of purpose fueled by the certainty of knowing that you do this because you HAVE to. Sing. Let you, or your instrument SING. Let it sing so loudly that you feel it to the core, and then see if you can do that to your audience. And when you've done that, do it again. Try to make each song, each note, better than the last.

And lastly, when you find that your voice doesn't have the strength it needs to create something beautiful, turn to someone else's creation that you love so desperately and give thanks for the existence of something so beautiful.

That's my process for creation and if it helps anyone else go forth and write some great music, then I am humbled to know that I've added to the world.
Posted by Rita Webb