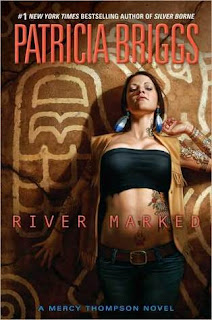 River Marked by Patricia Briggs
My rating: 5 of 5 stars

I can't think of a series that has dug itself so deeply into my mind and heart. I wish, wish, wish that I was Mercedes Thompson, except I don't know if I could handle all the damage she takes. I'm not sure I could have the courage to face what she faces. I'd like to think I would though.

I never buy books because I just don't have the space for them, and I prefer to read something new rather than something old. But when I got a gift certificate to Barnes and Noble for Christmas, I decided to use it on buying the Mercedes Thompson series. I had just read the entire series for the first time in October/November, and although I had a long list of books to read, I already wanted to read them all again.

And when River Marked came out, I ordered it from Amazon that day. When it arrived two days later, TJ and I fought over who got to read it first. He won and I was miserable for another day.

So when I say this series has really gotten to me, I mean it.

In this latest installment, Mercy and Adam are on their honeymoon, and of course, Mercy has to get herself into a world of trouble--an ancient Indian monster is marking people as slaves and eating them. Mercy's connection to Coyote is the only thing that can stop it...


View all my reviews
Posted by Rita Webb