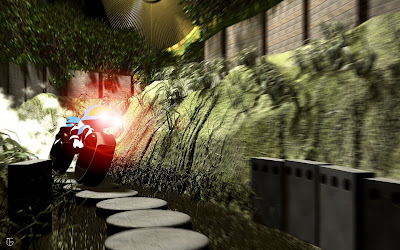 I sometimes wonder why it is that some people can draw these amazing things with little or no effort. Toby is one of those people. I watched him at work during meetings, doodling on his paper, creating this ink drawings that were absolutely amazing. I would watch spellbound as line after line would reveal the most amazing face, creature, vehicle, spaceship, animal, I had ever seen. How did he know how to put that line there? Did he see his picture in his mind before he started? Or did he make it up as he went along?

So I asked him to create something that I could share with all of you, and this tron-like motorcycle is what he built for me. It reminds me a bit of Wall-E; I can almost hear the motorcycle's little motor as it zips about.

Here's some of Toby's words when he sent me the artwork--a little about how he created it:

Your request was for fantasy/sci-fi and I tended more toward sci-fi, in that it's a picture of a tron-looking motorcycle cruising around an O'Neill cylinder, which is pretty solidly science-based, and not real yet. It's what you end up doodling when you spend your high school years playing Extreme G and watching Babylon 5. Almost all of this image was created in a single real, fake 3D scene, except for the headlights and motion blurring. The background is a sort of virtual matte painting, in that I rendered it seperately and dropped it in the background, literally slapped on a wall. Most textures are photosourced.

If you're interested in the software I used, it's all free and you can download it and try it out yourself. The actual rendering was done in Bryce 5.5 which is the free counterpart to 6.0 (the current release client). Post was done in the GIMP, a free Photoshop clone that really works better in Linux than in Windows if you just happen to have Linux installed.

Email ThisBlogThis!Share to TwitterShare to FacebookShare to Pinterest
Labels: art