I confess I rolled my eyes when I started this book. I thought it would be the exact same plot as Catching Jordan, only with baseball instead of football. In fact, I even knew who the love interest would be.


Boy, was I wrong. And the author wowed me again with a great plot and story arc.


Parker is the opposite of Jordan. Both are strong characters, and both have cut off a side of themselves to hide who they really are. But where Jordan cut off her feminine side, Parker hid the tomboy side after her mom came out of the closet, divorced her dad, and then moved half-way across the state to another city. It didn’t help that Parker’s once-upon-a-time best friend spread rumors about Parker also being gay.


So Parker quit baseball, lost thirty pounds of muscle by refusing to eat, and kissed every boy she could get her hands on. She didn’t ever sleep with anyone, but she let boys use her body with the sole purpose of proving she wasn’t a lesbian.


This need to prove herself to the world led her to an unsavory relationship with an older man—a teacher and coach in the high school. This part of the book was hard to read. I could see how this road was leading to self-destruction, and it was painful to watch. But the author handled it BRILLIANTLY.


I cried a lot in this book, first at Parker’s pain at her mom’s supposed betrayal (leaving the family and moving away) and then at the trouble Parker got herself into that made her call her mom and ask for a shoulder to cry on.


Parker’s road to healing was very different from Jordan’s. Where Jordan needed to find her feminine side and gain some female companionship, Parker needed to simply find herself and stop being something she wasn’t. One of my favorite parts was at the end, when she’s reading a book and a girl asks to sit and have lunch with her. Parker says that she’d rather be by herself for a while.


Sometimes that’s a good thing—to recognize the need to be alone and the willingness to stand up for your boundaries.


Although Parker’s situation was different from Jordan’s, the character development and the reconciliation theme were similar, and it is my hope that the next will have similar themes with new characters and new situations.


In the end, I have to say: Amazing book!

Read for the 2013 Feminist Reads Challenge 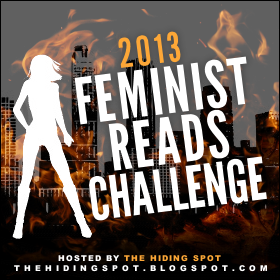