Isn't this cover GORGEOUS? Love it! 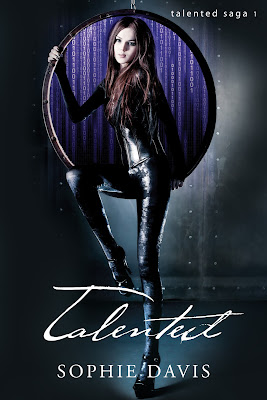 
When Talia Lyons was just a child, her parents were murdered before her eyes. Offered a choice between accepting their fate and exacting revenge, Talia trains to become one of the country’s deadliest assassins in order to kill the man responsible for their deaths: Ian Crane. Luckily, Talia was born with a gift- the ability to read and influence the minds of others. At sixteen, Talia is poised to graduate from the McDonough School for the Talented, where she learned to control her abilities. Now there is only one obstacle standing between her and the retribution she craves... Talia herself.

Her greatest asset may also be her undoing; while a formidable weapon in the field, Talia’s talents prevent her from both shutting off the mental connection she shares with her questionable boyfriend and blocking out the thoughts of a beguiling fellow recruit. But Talia can’t afford to have the feelings and distractions of a normal teenage girl, when her life is far from normal.

She must regain the single-minded determination that has brought her this far, or it may cost Talia her life when she finally faces Crane. And even after being molded into a weapon of war, she’ll still have to find the strength it takes to pull the trigger.

If James Bond and Sookie Stackhouse had a love child with a yearning for vengeance, her story would be TALENTED: an adventure about powerful teenagers who aren’t afraid to embrace their fears and fight for what they believe in.


This sounds like a delicious book. And for a limited time it is FREE. So go check it out!
Posted by Rita Webb