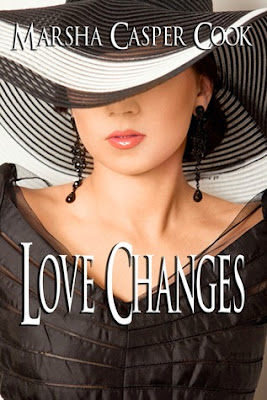 Synopsis:
When lies come back to haunt Elaine, can she find a way to forgive herself?

We’ve all heard the comment, “Sometimes life is too damn hard.” That’s what people say when they aren’t ready to move forward with their lives. Elaine Lewis was one of those people. She had made some bad decisions, but after spending months in therapy at the Castleberry, her future depended on her ability to forgive herself. With the help of a wonderfully patient nurse, a secure and passionate doctor, and a husband who loved her very much, she was able to find the miracle she had been looking for. Life is but a dream, with many flashing moments.

Marsha Casper Cook is the author of 10 published books and 11 feature-length screenplays. Her published works include LOVE CHANGES, a contemporary romance novel, and TO LIFE, a non-fiction biography about being a teenager and surviving the Holocaust. She has also written four books for young children, SNACK ATTACK ,THE MAGICAL LEAPING LIZARD POTION and the poetry collection THE BUSY BUS. Her book NO CLUES NO SHOES  is the first of the Emelina Hewitt and her dog Stanley series. Marsha's latest work and her first in a romance collection, VIRGINIA TEMPLETON STORIES   has just been released in paperback and she is currently working on LEO LOVES GRACIE characters taken from her screenplay Prince Charming which will be out after the first of the year.

Since early 2010, Marsha has hosted radio shows on Blog Talk Radio. She and Virginia Grenier,the other half of World Of Ink Network Blog Talk Radio, have been doing shows for almost four years. Her show "A Good Story Is A Good Story" is about writing.Marsha does discuss many subjects on her radio shows but her love of writing draws her to talk to other authors and marketing experts.

She will be adding different shows this year with her partner at World Of Ink Network, Virginia Grenier. Marsha is also is doing Radio Book Launches with Marnie McNiff and Virginia Grenier with Michigan Avenue Media.Inc. specializing in Children's Books, Romance and Thrillers.
Join Marsha at Blog Talk Radio where she does her WORLD OF INK NETWORK radio shows.  http://www.worldofinknetwork.com.

It was early afternoon when Elaine arrived at Arlington Racetrack. The elevator to the clubhouse was exceptionally crowded for a weekday, but to Elaine it didn’t make much difference. She had reserved the same table for the entire summer. Money was of no concern to her. If it took an extra twenty, fifty or sometimes a crisp, hundred-dollar bill to help matters along, so be it.
Having money did help with life’s daily struggles. But long range, money could do nothing to change her sadness. Unhappiness was a permanent way of life for Elaine.
Elaine hadn’t been seated for more than a minute or so when a waiter approached her table. He placed a large pitcher of lemon water and a basket of rolls on the stark, white tablecloth.
Elaine smiled, appreciative of the young waiter’s acute sense of recall. They didn’t speak much, but he smiled when she did.
As always, Elaine had not placed a bet on the first or second race. That was her time for gatherings thoughts and pulling the loose ends of the day together.
Some days she placed bets on only a few races. Those were the days when her mind wandered, remembering what she was trying so hard to forget. It was on those days that she usually picked the winners. But of course, she didn’t care. That really wasn’t why she came.
The ten-minute bell rang. It was the third race. Elaine reached inside her bag and pulled out several hundred-dollar bills. She crumpled them as she walked toward the betting counter. With a brief glance, she pointed to a number and handed the money to the woman at the window.
The race ended. Elaine had won. She paid little attention to the fact that she had bet on a winner.
A bolt of lightning flashed. Seconds later, a voice over the loudspeaker called out, “Due to severe weather, we are canceling the remainder of today’s races.”
Disappointed voices filled the clubhouse. Just as everyone seemed to be leaving, Elaine felt a tap on her shoulder. She looked up, not recognizing the young man who stood before her.
“Hello,” he said in a very mellow voice.
“Do I know you?” Elaine asked in a swift, uninterested voice.
The young man’s smile was attentive. “Yes, as a matter of fact you do. We met at an art showing. You were with Sally Braverman. Now do you remember?”
“No, I’m sorry I don’t.”
“That’s okay. It was only my art showing and my art gallery. I guess it was foolish of me to think you might remember.”
A brief but apologetic smile appeared on Elaine’s face. “Oh yes, now I remember.”
“Thank goodness,” he laughed. “I thought I was losing my touch. Although, you might be good for my ego. You know, the ego I just lost.”
They shared a smile.
Holding out his hand, the young man introduced himself. “I’d better not embarrass myself any more by thinking you know my name, so I’ll make it easy on myself. Josh Derman.”
Elaine was just about to say her name when Josh interrupted. “Elaine Lewis. Am I right?”
Elaine nodded, surprised by his memory.
Josh was just about ready to sit down when Elaine stood up. “You’ll have to excuse me, but I should be leaving.”
“Then I’ll see you tomorrow,” he said.
“I don’t think so,” Elaine responded quickly.
“You’re here every day, so why not tomorrow?”
Elaine felt uneasy. “How do you know that?”
“Because I’ve seen you here every day for the last few weeks,” Josh smiled.
Elaine didn’t know what to say, so she didn’t respond. Instead, she pleasantly smiled and walked away.
Josh didn’t try to stop her as she walked toward the elevator. He just watched her leave, wishing they had been leaving together.
As Elaine drove home, she wondered why such an attractive man, obviously several years her junior, would be interested in her. She should have been flattered, but she was just curious.