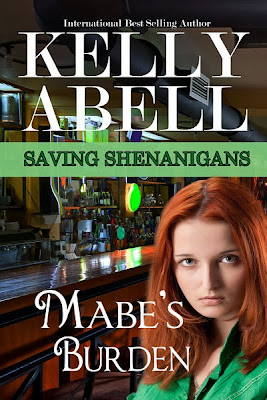 
Blurb
Hot tempered, Mabe O'Banyon will do whatever it takes to keep the family's Irish pub, Shenanigans, out of the mob's dirty hands. She quickly learns, though, their attorney and the bank will offer no help. So, she calls in the reinforcements--Mara and Meg. She hasn't seen her two sisters for years, but her desperate message brings them running.
Commercial real estate developer, Aaron Shaw has a secret. He arrives in Monticello, FL, expecting to purchase a quaint Irish pub and move on to his next conquest. But the transaction doesn't take place as planned--in fact, it doesn't take place at all. The hardheaded owner--a stunning redhead with curves that don't quit--isn't selling.
With time running out and the mob on their heels, Aaron wants nothing more than to save the woman he's fallen for from impending danger. Mabe is torn between a man she loves but can't trust and the need to hold on to her family's pub. Their choices lead them down a path neither could have guessed.


One-liner
While being threatened by the mob, a hot-headed barkeep goes toe-to-toe with a real estate developer who wants to save her and falls head-over-heels...until she learns he's been keeping a horrible secret.

I can't remember a time when I didn't want to write.  From the time I was learned enough to string sentences together I liked writing stories.  In high school I was the literary editor of our school magazine Sketches and had a series of short stories that I'd written even then.  I'm published with two wonderful publishers, World Castle and Solstice Publishing, and on my own as an Indie.

I live in Florida with my two adult children and my husband of 30+ years.  I have a wonderful dog named Snickers that can even open her own Christmas presents! (don't believe me?  Look below) When I'm not working full time in the insurance industry, I write.  I believe any writer should write because they love the craft. The rest will come in time.  I hope you enjoy reading my stories as much as I've enjoyed writing them.

When Mabe meets Aaron Shaw for the first time

The door to the pub swung open for a tall, ebony haired man wearing an expensive tan suit. Mabe straightened. Riveted, she stared at his strikingly angular face. His chin, grooved by a slight dimple, struck her as sexy.
His gaze roamed the bar, settling on her. Warmth radiated through her entire body. Never had she felt such an intense attraction to a man. Who the hell is he? She didn’t recall ever seeing him in the pub. Her nerves tingled. Resembling a panther, he wove his way through the crowd. Slightly ashamed of her attraction to a strange man at her father’s wake, she turned her back, resuming her position behind the bar. She spoke to several patrons, mentally noting their drink orders on her way.
“No one could pull a pint like your da,” an old grizzled man at the end of the mahogany counter stated. “Smooth like silk he was.”
Mabe smiled. “He was, Angus. We’ll miss him.” She handed a frothy mug to the man. “Here you go. Enjoy that.”
“I will,” Angus declared, raising his glass to her. “To many years.”
She picked up a glass of Coke, clinked it against Angus’s mug. “And to you.”
“I’ll have one of those if you don’t mind,” a deep voice spoke from behind her.
Turning, ready with a flirty response on her tongue, she came face to face with her handsome stranger. His eyes matched the deep rich mahogany of the bar. His smile, while slightly crooked, seemed genuine and swept the words right out of her brain.
“Uh…sure. Name your poison.”
“Guinness?”
Mabe nodded, pulled the beer, scraping the foam from the top. “I’ve never seen you here before. What’s your name, and how did you know my dad?”
His gaze caught hers, sympathy reflected in his eyes. She tried to look away, but she couldn’t. The man was a god.
“I’m sorry for your loss.”
“Thanks. He will be missed for sure.”
“I just realized…this is his wake, isn’t it? A private party?”
She nodded. “It is.”
The man smiled gently. “I’m sorry. I’m afraid I’m intruding. I should go.”
She set the beer in front of him. “Nah, we’re all friends here. It is a private party, but stay if you’d like.” She gestured. “Those are my sisters Meg and Mara. We own the place now.”
“It’ll be hard to run it without your father, won’t it?”
Mabe sighed, leaning on her elbows. “It won’t be the same, for sure, but we’ll do okay. It’ll take some work….” She glanced lovingly around the pub with all its Irish paraphernalia adorning he walls. “Da, loved this place. I grew up here. It’s our place. We’ll make it work.”
She shivered, feeling his intense stare. Her skin burned under the laser scan of his eyes. Her pulse jumped. If the room were empty except for the two of them, he’d be in some serious trouble. He took a sip of the Guinness, still staring at her over the mug.
She licked her lips then broke the gaze. She swiped at the glossy mahogany top with a rag. “What brings you to town?”
“Business,” was his response.
“Ooh, cryptic, are we?” She flirted.
“Suits me for now.”
A man at the end of the counter signaled for her. She held up a finger then approached her guest. She served a few more beers, all the while being extremely aware of his gaze. His allure was more powerful than any she’d ever experienced. Monticello wasn’t full of dashing men in expensive suits, but it had its fair share of good lookers. Lord knew she’d flirted with some from time to time, even dated a few, but none of them stirred in her what this man did.
No longer needed, she returned to him, eyeing his empty mug. “Another?”
He nodded, offered her a smile.
Her knees weakened. She steadied herself by grasping the smooth wood. What the hell is wrong with me? She pulled his beer, but before she handed it to him she asked, “What did you say your name was?”
He chuckled. “I didn’t.”
She set the mug down in front of him. “Oh, come on. You’re not going to waltz into my pub during my daddy’s wake and not tell me who you are. It’s not polite.”
One dark eyebrow rose. “Not polite, huh?”
“Not at all,” she declared, leaning on the bar, offering him her most dazzling smile.
“Okay then…if you insist.
“I do.”
He held out his hand. Mabe reached out, taking his warm palm in hers. The air between them practically crackled with tension. “Aaron Shaw.”
Her previously heated blood froze. In one swift moment, all the allure she’d experienced earlier evaporated. This is the shark trying to buy my pub. The nerve of this man, waltzing in here, flirting with me, when all the while he’s casing the joint for a future purchase. She grabbed his beer unceremoniously dumping it on his head. The dark brew dripped from his hair all over his tan suit.
“What the hell?” he shouted, jumping off the stool.
“Get out of my pub,” she yelled at him.