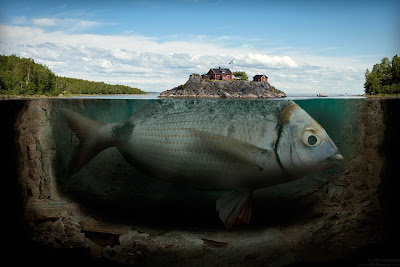 I am mesmerized by Johansson's work, but this picture in particular captures me. First, I study the fish. It is the scales at the top that fascinate me the most. Comparing the scales to the rock on the island, I think the scales seem to match. Are they torn or are they rock, I wonder. Without an answer, I move to what catches me next: the fish's eye.
Is he a real fish? His face looks like stone or marble, exquisitely carved. But the fish's fin is slightly translucent, just as a real fish would.

I look at the rocky walls where the fish is trapped. They line up perfectly with the land above. I study them through the murky water. Every detail is so clear.
Finally I look above the water. What would it be like to live on that island? If the fish should flick its tale, would it knock the pictures from the walls? I hope the fish doesn't get hungry. That poor fisherman might get quite a surprise.
* ~ * ~ * ~ * ~ * ~ * ~ * ~ * ~ * ~ * ~ 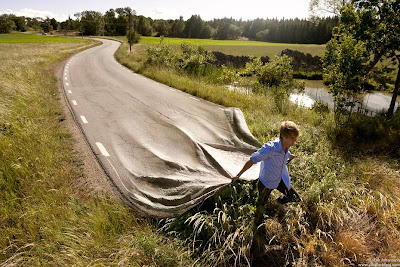 My eyes are drawn to the folds in the road. No, not quite. Actually, it is the man that fascinates me. What is his mission? How did he come by this task of pulling a road? Will he ever be done? He seems so determined. So strong. As though nothing could deter him from his purpose. Like Atlas holding the world. I think I'd like to write a story about this man, except Johansson has already captured the story. My words would never achieve what I see.

Then my mind moves to figuring out how the magician mastered the trick. Surely there must be a seem where the two pictures are melded. I study the road, the grass, the lake. In all that studying, I almost missed the car in the distance. There goes the theory that it wasn't a real road. I shake my head, giving up, and instead study the man once again. A story I could never write.
* ~ * ~ * ~ * ~ * ~ * ~ * ~ * ~ * ~ * ~
Erik Johansson agreed to let me use his pictures and to answer some questions. You can see his other works here at allt eller inget.com
1.) Where do you find your inspiration?


Since most of my work so far is personal projects, I work when I feel like. It begins with an idea that I want to realize. I get the inspiration from everywhere from daily acclivities to magazines and books. Hard to say how I get it, it's just there. When I know what I want to do I usually begin looking for places where I can take the photos that I need, this takes a lot of time and the scene is very important for the final result. When I have find the places and taken the photos I put them together in the computer. I try to make it look as real as possible and the light is everything to make it look good together.


2.) How did you get started in photography?


I have always been drawing since I was a kid. In the year 2000 I got my first digital camera as a birthday present. I discovered that it was fun to change the photos in different ways and it was similar to drawing in a way that you create something more than just the photo. I did some basic manipulations but got tired of it after some time. In the year 2007 I was out in the Swedish countryside with a friend who bought a DSRL-camera a year earlier. I tried his camera a few times before but this day I decided that I would get my own. That was two years ago and since then I have learned a lot.


It depends. Most of the time, the planning is what takes most of the time. I need to find the perfect place to take all the photos that I need. The work in the computer usually takes 10 hours or more.
Posted by Rita Webb