A couple weeks ago, we took the kids to the zoo, but this was no ordinary zoo, built into someone's backyard. Heaven's Corner Zoo and Animal Shelter was started when one man took in an animal that the owner could not take care of any longer. The compound has since grown to hold wallabies, monkeys, turtles, snakes, lizards, cougars, leopards, jaguars, panthers, tigers, wolves...

The zoo keeper was our personal guide, and he made the experience quite memorable. When the girls wanted peacock feathers, he went inside the fence and collected some. He took us to the bears and fed them peaches. The boy stood up on his hind legs, and the zoo keeper put the peach in his mouth. It rolled to the back of his mouth, and I thought he was going to swallow the thing whole or choke on the thing. But then he spit out the core and placed it carefully on the edge of the fence.

When the big macho male bear refused to get out of the way for the girl, the zoo keeper said, "Get down," like he was talking to a dog. When the male didn't listen, he said, "You know she's going to get mad at you." The bear got down. He seemed to really understand what the zoo keeper was saying. 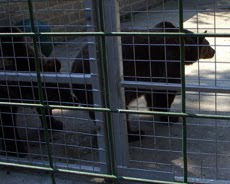 The nasty-tempered leopard gave us angry looks. "Good morning," the zoo keeper said in the happiest, sweetest voice. The leopard growled. The zoo keeper grabbed the cat's toe. The cat's voice was a deep rumble that I could feel vibrate through the air. 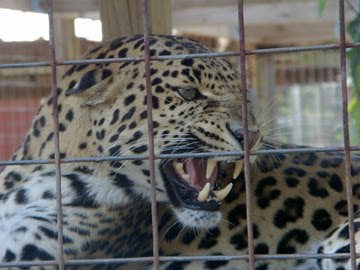 The girls got to hold some snakes. I love those proud little smiles. 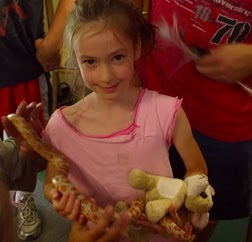 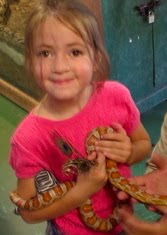 My husband is a wolf man. From our earliest days of dating, I learned that his wardrobe consisted of wolf T-shirts and jeans and hiking boots. We stood outside the pen of a two arctic wolves, and TJ howled at the dark gray wolf. This wolf sang back to us a sorrowful song. It sounded as though his heart was in his voice. Like sorrow's song. All the other wolves joined in.

But the best part, for me at least, was the white tiger. He seemed to think he was a kitten, and he played a stalking game with the zoo keeper. The guy sat with his back against the fence, and the tiger crept closer. He lined itself up, crouched, backed up. He was ready to jump but decided the situation wasn't right, so he slunk away only to creep back five minutes later.

It reminded me of my own cat, how she crouches around the corner, waiting to pounce on us, the twitch of her tail, the tense muscles across her back, the way she moves backward to prepare for the final leap. Only the white tiger was 800 pounds; my cat is maybe 10. It was surrealistic to watch as though one image overlaid the other. Like when my friend's daughter smiled at me and it was her father I saw looking back at me.
Posted by Rita Webb