Of all the stories in the Ménage à 20, Tales with a Hook anthology, I have to say A Gift Horse by Susan Curnow was my favorite. It's hard to pick among such beautiful stories, but Susan managed to captivate me with a story I did not expect.

A girl rescues a horse, buying him from the auction where he is sure to be sold to the meat market. A beautiful tale, right? You'd think the story would be predictable, another Black Beauty. She'll train him and they'll win races together.

Then Susan drops this line:

The bran mash smells of earth and sweetness. What he wants is a side of venison, fresh river greens, and a glass of wine scented with oak.

...and I'm snared. This is not what I expected. Something's not quite right. Surely this horse is not what he seems, and surely Susan has revealed her hook too soon.

But not so. Again, Susan surprised me. As the story unfolds, I found myself trapped in a prison of words, and when the final line was read, I turned the last page, looking for more, knowing there was none but wishing it would magically appear.

You just can't leave a story there! What happened next? 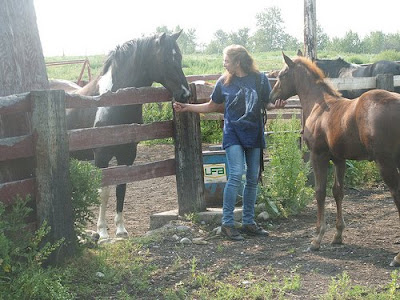 I contacted Susan with the request for an interview. You see, I had ulterior motives; I wanted to know when I could expect to read more by Susan Curnow.

Rita: What inspired you to write your story The Gift Horse?
Susan: A combination of having written a novel based around kelpies and the fascinating myths of the Fae. It was also a tribute in its way to a brave horse that I rescued, who was a cheeky fellow and thought he could wrap a person around his hooves with his charm. I'd also been to horse auctions where horses literally go for a song or to the meatman, which saddens me so much. I wanted to write a happier tale. Women have a special connection with horses, and in some ways, I think we almost want them to be people as well. In this story, one is, or almost...

Rita: Hmm, I like that phrase: "...thought he could wrap a person around his hooves with his charm." Sounds like quite a horse. Sounds like some people I know. So what can we look forward to from you in the future?
Susan: I have THE HOUSE OF FAEGRIM, a fantasy novel, currently being looked at by an agent, but it is only at the partial stage right now so, fingers crossed! I am also writing a novel based on an eight-sided castle, which I found when I was researching castles for another novel. VICADIA is almost cross genre in that the castle and world are controlled by beings who like to play games with the worlds they have created. In the first draft stage right now, but I'm getting there.

Rita: Follow Susan's blog and you too can see what's coming next with this author.
Posted by Rita Webb