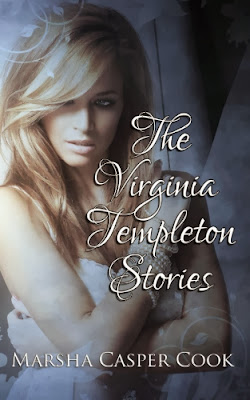 Synopsis:
Virginia’s marriage of ten years to Slater Templeton, a ruthless corporate titan, has provided her with all of the comforts she could ever imagine, but still something is missing. He is all about wealth and accumulating power and has been successful far beyond all expectations, but she has her own agenda and is obsessed with the power she leverages through her undeniable sexuality. Together they are a force to be reckoned with. Slater is the demon and Virginia his temptress. In this loveless relationship, their only connection is the power they share while the diva within her needs more. Will her unquenchable desires lead her to keep dark secrets and to create a life for herself that will take her where most others fear to tread?

Marsha Casper Cook is the author of 10 published books and 11 feature-length screenplays. Her published works include LOVE CHANGES, a contemporary romance novel, and TO LIFE, a non-fiction biography about being a teenager and surviving the Holocaust. She has also written four books for young children, SNACK ATTACK ,THE MAGICAL LEAPING LIZARD POTION and the poetry collection THE BUSY BUS. Her book NO CLUES NO SHOES  is the first of the Emelina Hewitt and her dog Stanley series. Marsha's latest work and her first in a romance collection, VIRGINIA TEMPLETON STORIES   has just been released in paperback and she is currently working on LEO LOVES GRACIE characters taken from her screenplay Prince Charming which will be out after the first of the year.

Since early 2010, Marsha has hosted radio shows on Blog Talk Radio. She and Virginia Grenier,the other half of World Of Ink Network Blog Talk Radio, have been doing shows for almost four years. Her show "A Good Story Is A Good Story" is about writing.Marsha does discuss many subjects on her radio shows but her love of writing draws her to talk to other authors and marketing experts.

She will be adding different shows this year with her partner at World Of Ink Network, Virginia Grenier. Marsha is also is doing Radio Book Launches with Marnie McNiff and Virginia Grenier with Michigan Avenue Media.Inc. specializing in Children's Books, Romance and Thrillers.

Join Marsha at Blog Talk Radio where she does her WORLD OF INK NETWORK radio shows.  http://www.worldofinknetwork.com.