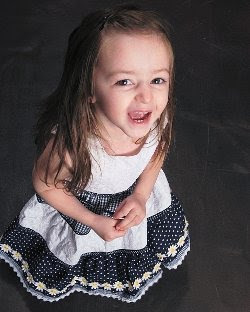 My youngest daughter has been called a firecracker. She exudes attitude.

When she was one-year old, we called her Jack-Jack because she seemed to have some power to get the clothes on the upper, unreachable shelf. Everyday, when she got up from her nap, she was wearing something new, something she couldn't have reached.

One day, TJ and our friend Jacob asked her, "Kaylee, how did you get those pants?"

She batted her eyes and looked away, as if she was innocent. Where does a 1-yr-old learn to bat her eyes?

When she was two, she loved Moe from the Doodlebops. She always likes the comic relief characters. One night she was supposed to be in bed, asleep, but I heard noise coming from her room. I opened the door to find her standing in the middle of the room, her lights on, and in her hands, she held paper rolled into the shape of drum sticks. "I'm Moe," she said. But then she realized someone had caught her and scrambled back to bed.

I'll never forget that look on her face as she brandished her drumsticks. A year later, she still shows interest in drums. I have since caught her with a line up of pillows that she was using as drums as her sisters were playing their recorders.

Kaylee is now 3 years old and has only gotten more fiery. This last summer, I overheard a conversation between Kaylee and a neighborhood boy who was teasing her.

The boy: You're a baa-aaaby.

Kaylee: I am not a baby!

She was on her skates, scooting about on the side walk. When she got to where the boy was, she rounded on him.

I wasn't sure whether to scold her or cheer her on.

Lately it has been the adult way in which she speaks her mind or expresses herself. Sometimes it is the words or the inflection she uses that surprises.

Beggar's Night, I overheard this exchange:

Kaylee, throwing the words over her shoulder: I know. It is my Trick-or-Treat dress.

She paused for a moment, still not looking at the guy as she continues to her next house.

Kaylee: It's my Halloween dress, actually.

It was the word "actually" that got me. It was stated with such precision and poise. Where did this girl learn to talk like that?

Finally, here's an exchange between me and her on the drive to the gluten-free bakery that we visit weekly:

Kaylee: Mommy, look I have a bunny on my shoulder.

There is no bunny. hop. But I play along.

Mikey is her invisible friend. She holds his hand when we walk around the park, and I've heard her having conversations with him. She's scolded me for sitting on him.

Kaylee, pointing to the floor of the van beside her chair: Oh, he's over here.

An hour later, we drove to church after finishing our meal.

Kaylee: Oh no, I forgot my bunny at the gluten-free place!

How do you forget to bring your imaginary friend? She wanted us to go back and get him.