Twas the night before Christmas and all through the house
Not a creature was stirring, not even a mouse.

A beautiful story if a bit unrealistic. In our house, the kids zipped about, chasing each other up and down the stairs, hollering and singing and dancing. They get it from their father. I blame it all on him.

It was late before I finally got them to sleep. Because I told them Santa wasn't real, I can't use the line, "Go to bed or Santa won't come." There's no manipulating them into early bedtimes.

And before you scold me for ruining the Christmas spirit, these three little girls with their vivid imaginations create the magic of Christmas all on their own.

OK, the truth is I'm not any good at lying. Since my own parents thought that Santa was against their religious beliefs, I never believed in him (never went trick-or-treating either). So I never got the whole Santa thing. I don't understand why people make such a big deal about him.

Finally curled up in bed, snuggled up warm and tight to TJ, I dreamt of something like sugarplums in my head, but a thud clattering down stairs woke me. I poked TJ. "Someone broke in," I said.

"Grahgrahgrahgrum," he answered and rolled over.

I grabbed my robe and snuck down the stairs. The last thing it could be was Santa. After all, I just said how he didn't exist. Careful not to kick a toy, step on the cat, squeak a floor board, I crept closer, one step at a time, and peeked over the railing. A man wearing combat boots and red Santa hat was sifting under the tree, picking up boxes, shaking them, and tossing them back over his shoulder. In the light from the window, I could only make out some dark hair, a scowl, and a ring glistening on his finger.

Who was this guy?

He wasn't CJ. At least, he didn't seem to have CJ's catlike grace. He wasn't invisible, so he couldn't have been Rico Suave.

What was he doing in my living room? Going through our presents? He must have thought there was something hidden here—something that obviously didn't exist. I mean, come on! Why would I hide a dangerous package in my house, under my Christmas tree?

I snuck back up to my room and grabbed my camera. Hey, I may be brave, but I'm also smart enough to know when I'm outmatched! If I could just get the pictures into the right hands (ahem, the Sandbox Investigations Director Paul Mitton)…

Coming back down the stairs, I tripped, tumbling down, and tackled the poor, innocent cat. My mysterious intruder looked up, surprised, giving me a good look at his dark eyes. Then he turned and ran.

I jumped to my feet and raced after him, snapping pictures as fast as I could…

through the school room,
into the kitchen,
past the dining room table,
around the rocking chair,
down the hall,
out the front door…

Then he jumped into a silver car and sped away. License plate started with the characters "7DRA."

Disappointed, I went back inside to check the pictures. I had snapped 10 or so and only one of them came out— 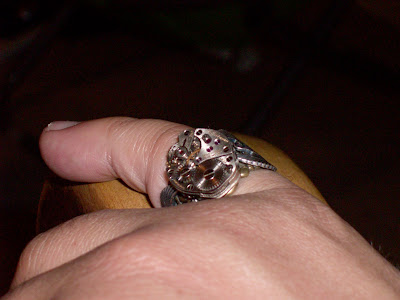 —a picture of his hand with the ring as he swung around the rocking chair.

Now let me just say that my digital camera is not the best. I got it on sale for $80 a few years back. I was proud to have it—my first digital camera—but there is this 2-second delay between when I click the camera and the picture is actually taken. In that time, any moving target is gone.

Hey, if you have a problem with that, I'll email you my address, and you can ship me a new one. I mean, geez, I risked life and limb to bring you this story!

If anyone has any information about this ring or why GergisKhan was searching the Christmas presents under my tree, please let me know.

Disclaimer: This is a fictional story, written by reader input. Thanks to Carlos, Gwen, Renee, Joe, and Henry for their cooperation. You all have made this a joy to write.

This story is dedicated to the online Goodreads group On Fiction Writing and the authors of the Ménage à 20.
Posted by Rita Webb